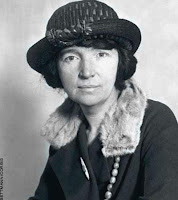 “No woman can call herself free who does not own and control her body.”
Sometimes social factors slow progress toward improving health more than lack of awareness or the absence of technology. No 20th century public health achievement demonstrates this more clearly than the struggle to provide women in the United States with safe and effective birth control. Margaret Sanger (September 14, 1879-September 6, 1966) risked scandal, danger, and imprisonment to challenge the legal and cultural obstacles that made controlling fertility difficult and illegal.
Margaret Louise Higgins was born in Corning, New York, the sixth of 11 children. Her free-thinking father's politics might have ignited her activism, but watching the process of her mother, aged 50 years, die after 18 pregnancies probably had an even deeper impact. Higgins was a nursing student in 1902 when she married architect William Sanger. Although weakened by bouts of tuberculosis, she bore three children between 1902 and 1910. The Sangers immersed themselves in the radical political and intellectual world of Greenwich Village in New York City. She worked as a visiting nurse in the city's tenements and wrote about sex education and women's health.
In 1914, Sanger's articles in The Woman Radical brought her a federal indictment for violating federal postal obscenity laws, prompting her to flee to England. As soon as the ship left U.S. waters, she cabled a radical publisher in New Jersey to distribute 100,000 copies of her pamphlet, Family Limitation. Sanger remained exiled in Europe until late 1915; William Sanger had been arrested and jailed for distributing one copy of Family Limitation, and Margaret Sanger returned to face the charges against her. Personal tragedy intervened when the Sanger's 5-year-old daughter died suddenly from pneumonia; public sentiments resulted in dismissal of the charges against Margaret Sanger.
Rather than backing away from controversy, Sanger and her sister Ethel Byrne, also a nurse, opened the first birth control clinic in the United States, modeled after those Sanger had seen in Holland. On October 16, 1916, dozens of Jewish and Italian immigrant women from Brooklyn's crowded Brownsville section lined up to receive counseling and birth control information. Nine days later police closed the clinic and arrested Sanger, Byrne, and the clinic's interpreter. Byrne was tried and convicted first, and went on a hunger strike. Sanger was convicted and served 30 days in jail. Legal failure had brought victory, however. The publicity surrounding Sanger's activities had made birth control a matter of public debate.
After World War I, Sanger continued her U.S. leadership role, although during the 1920s and 1930s, she refocused her energy toward international birth control, traveling and lecturing throughout Asia and Europe. In 1952, she founded the International Planned Parenthood Federation and served as its first president until 1959. Sanger died in Tucson, Arizona, aged 87 years, a few months after the 1965 Supreme Court decision, Griswold vs. Connecticut, that made birth control legal for married couples, the culmination of events Sanger had started 50 years earlier.
http://www.pbs.org/wgbh/amex/pill/peopleevents/p_sanger.html
Posted by Jessica at 10:10 AM